If your simulator flying involves online ATC or following real-world IFR charts and procedures, navdata is an important consideration for you. Navdata broadly consists of the waypoints, navigational aids (VORs, NDBs, ILSs, etc.), frequencies, and even airport information in your simulator.

In real life, navdata is related to Aeronautical Information Regulation And Control, abbreviated AIRAC. AIRAC is an international standard for common dates and navdata to be provided for navigation around the world. Established in 1964, AIRAC creates a 28-day cycle for navdata updates. In other words, every 28 days (and always on a Thursday), a new update is released simultaneously, around the world, with navdata. If you fly using a real-world IFR-certified GPS, you’ll be familiar with updating the navdata on the GPS every four weeks.

If you fly Prepar3D or X-Plane, the navdata included with your simulator generally reflects the world as it was when the simulator was built (using the current AIRAC cycle at that time). But, of course, real-world navigation is always changing. Ground-based navigation aids are being removed and replaced by RNAV waypoints, new SIDs and STARs are published, and airports construct new instrument approach procedures. Provided you routinely access charts in your flying, you’ll also want to keep navdata up-to-date. By doing so, you’ll have the ability to program and fly the same routes and procedures that are available in real life. 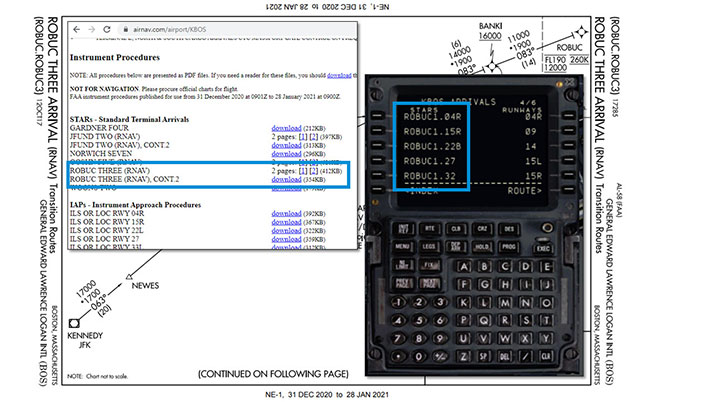 At the time of writing, AIRAC cycle 2101 (January 2021) was active. At KBOS, the primary southwestern arrival was the ROBUC3. However, the Boeing 737 pilot has not updated their navdata. As a result, although current charts list the ROBUC3, the pilot only has the outdated ROBUC1 arrival in their FMS.

How you keep your navdata current to the real-world AIRAC is based on the simulator you’re flying. For most sims, there are both free and paid subscription services available.

Microsoft Flight Simulator has partnered with real-world navigation provider NAVBLUE to supply data for the simulator and keep it current. This makes MSFS the only simulator that has promised to keep navdata up-to-date for each AIRAC cycle.

Microsoft continues to release updates for the simulator and we expect the default navdata will improve. However, for now, we recommend MSFS users consider an add-on service to fix missing navdata and keep the simulator up-to-date.

One of the most common providers of navdata for the flight simulation community is Navigraph. They provide improved navigation data and charts sourced from Jeppesen, a professional navdata provider for major airlines worldwide. Offered via a paid subscription, Navigraph's service keeps flight simulation navigation data current, in line with the real-world 28-day AIRAC updates. This includes updating over 70,000 waypoints, adding missing airports, and even redrawing some of the visual scenery around more than 18,600 airports. In addition to supporting MSFS, they offer solutions for X-Plane and Prepar3D.

For more information on Navigraph’s navdata solutions, visit their website.

Pilots still using Microsoft Flight Simulator X (FSX) will have navdata from 2006. This means that any procedure, waypoint, or VOR added, removed, or changed in the past 15+ years won’t be reflected in your default simulator. While recent versions of Prepar3D (P3D) have brought the navdata closer to the present, P3D does not provide live AIRAC updates. 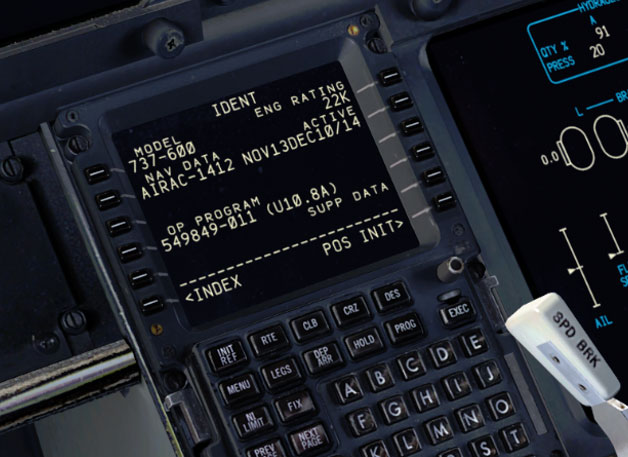 This Boeing 737, flown in FSX, has navdata from AIRAC 1412, which expired in December 2014. Without the navdata update from Aerosoft or Navigraph, the pilot won’t be able to retrieve up-to-date procedures or waypoints that have been created since 2014.

In the P3D/FSX infrastructure, navdata exists in multiple places. The stock aircraft included with the simulator rely on the base navigation data of the simulator. Add-on aircraft with their own GPS or FMS, will sometimes include navdata specific to the aircraft. This means that, while your simulator might have 2006 data, an add-on you purchased might have a more recent AIRAC. However, neither will be updated every 28 days.

All FSX and P3D simmers should consider this free FSX and P3D navdata update, which updates navigation aids around the world. This updates the "base" navdata in your simulator, meaning that flying conventional-based approaches (like an ILS or VOR approach) will be more accurate. The update is compatible with those of navigation providers like Aerosoft and Navigraph.

Very few P3D simmers fly the stock aircraft included with the simulator. Most choose to purchase add-on aircraft that offer significantly more realism and functionality than what’s available by default. In FSX and P3D, these add-on aircraft almost always include their own navdata. Consider for example one of the most popular P3D add-ons: PMDG’s 737 NGXu. The aircraft will ship with an AIRAC current as of when it was built. That means the aircraft’s FMS will have access to the SIDs and STARs available at that time. However, new procedures won’t be accessible in the database.

To keep add-on aircraft databases up-to-date, simmers turn to Aerosoft’s NavDataPro and Navigraph’s FMS Data. These paid subscription services work by installing software on your PC that automatically detects the add-ons you have, and then keeps them up-to-date with the latest AIRAC cycle. Annual subscriptions are about $30 per year, with monthly options available. Each is compatible with the most popular add-ons for FSX and P3D:

In X-Plane, one single database defines the navdata for the simulator. Like in FSX/P3D, X-Plane’s navdata reflects the AIRAC cycle when the simulator was released.

Unlike in FSX/P3D, it’s not as important to seek out navdata updates for every single aircraft you fly. Instead, navdata can be updated at the simulator level, and then be reflected in your aircraft’s FMS. (There are some exceptions.) As with FSX/P3D, the subscription products from both Aerosoft and Navigraph provide everything you need to keep your aircraft and simulator updated.

If you primarily fly in the United States, there is a way to keep some of X-Plane’s navdata up-to-date at no charge. The FAA publishes navaids around airport areas as well as some airport data, and this free file can be imported into X-Plane. This won’t be as seamless as using the paid services from Aerosoft/Navigraph because the FAA’s data only cover airport areas (not enroute data) and are limited to the United States. The X-Plane website has more information for how to install the file into your simulator (scroll down to "The updated approaches - what we get from the FAA for free").