Charts are the basis for navigation and are a key resource used by all real-world pilots. If you are planning to fly online, use your simulator for training purposes, or just want more accuracy and realism in your simulation, you’ll want VFR or IFR charts to supplement the experience.

Hear from sh3ed, a real-world Airbus A320 pilot, about how he uses aviation charts to enhance the flight simulation experience.

There are two sets of charts to be aware of:

Charts are produced by governments or government-authorized entities around the world for their national airports and airspaces. Some governments, like the United States, publish their charts for free. Others charge for access.

Based on government charts, third-party providers like Jeppesen and Lufthansa have created their own set of charts. These are available for the entire world in a consistent format on a paid subscription basis.

Although government charts can often be found for free, the look and feel of these charts differs around the world. For example, look at the arrival procedures published by the FAA on the left (IGN1 at KJFK) and by the United Kingdom’s CAA on the right (LAM1Y at EGLL): 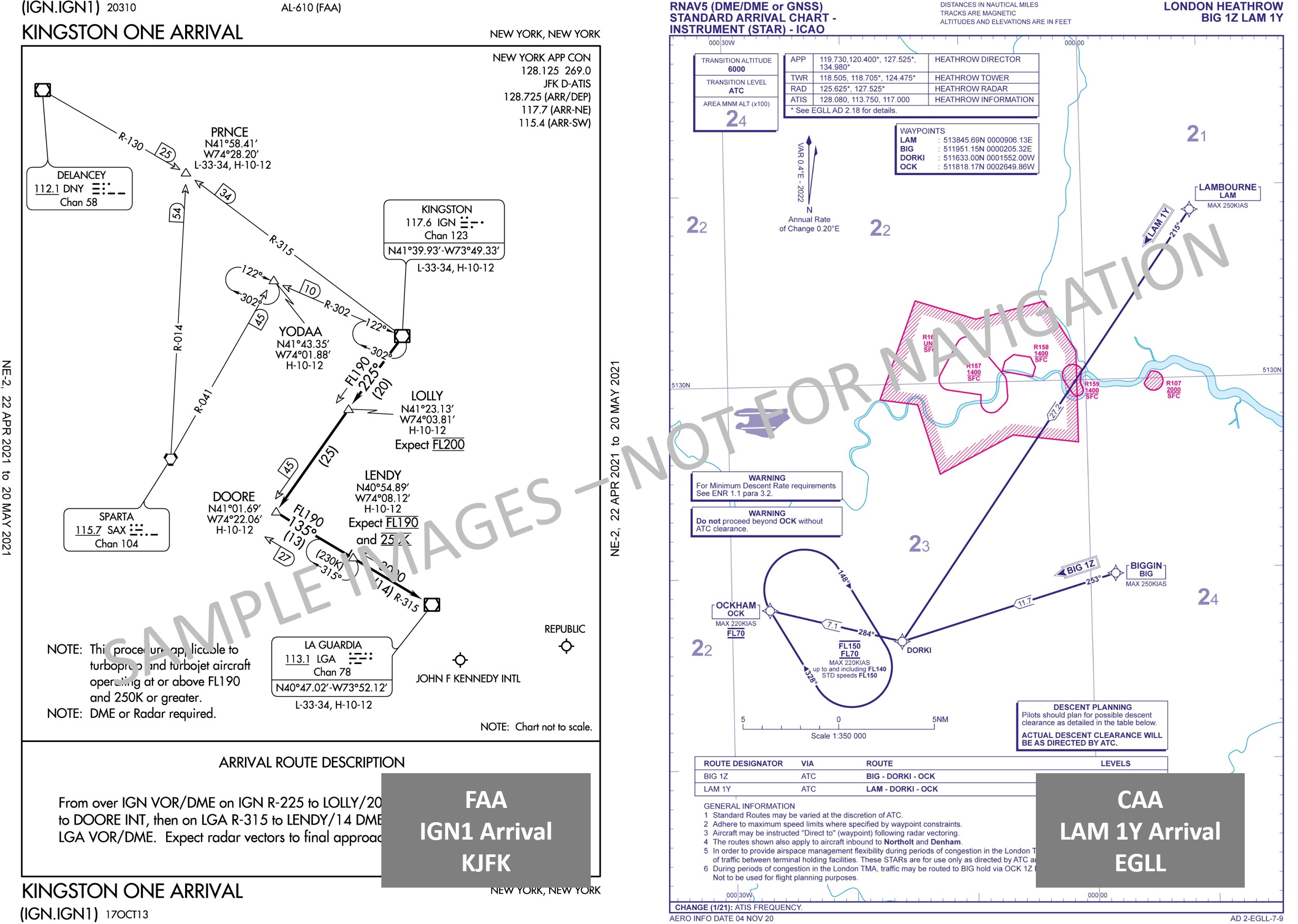 Note that much of the same information is available on each of these Standard Terminal Arrival Route (STAR) charts. However, the presentation, colors, and location is different between the two countries.

AD 2-EGLL-7-9 chart accessed via the UK Aeronautical Information Publication on 18 May 2021, reproduced with permission of the CAA and NATS. NOT FOR NAVIGATIONAL USE.

By comparison, the same two charts presented by Jeppesen, a commercial provider, have the same look despite the different countries. 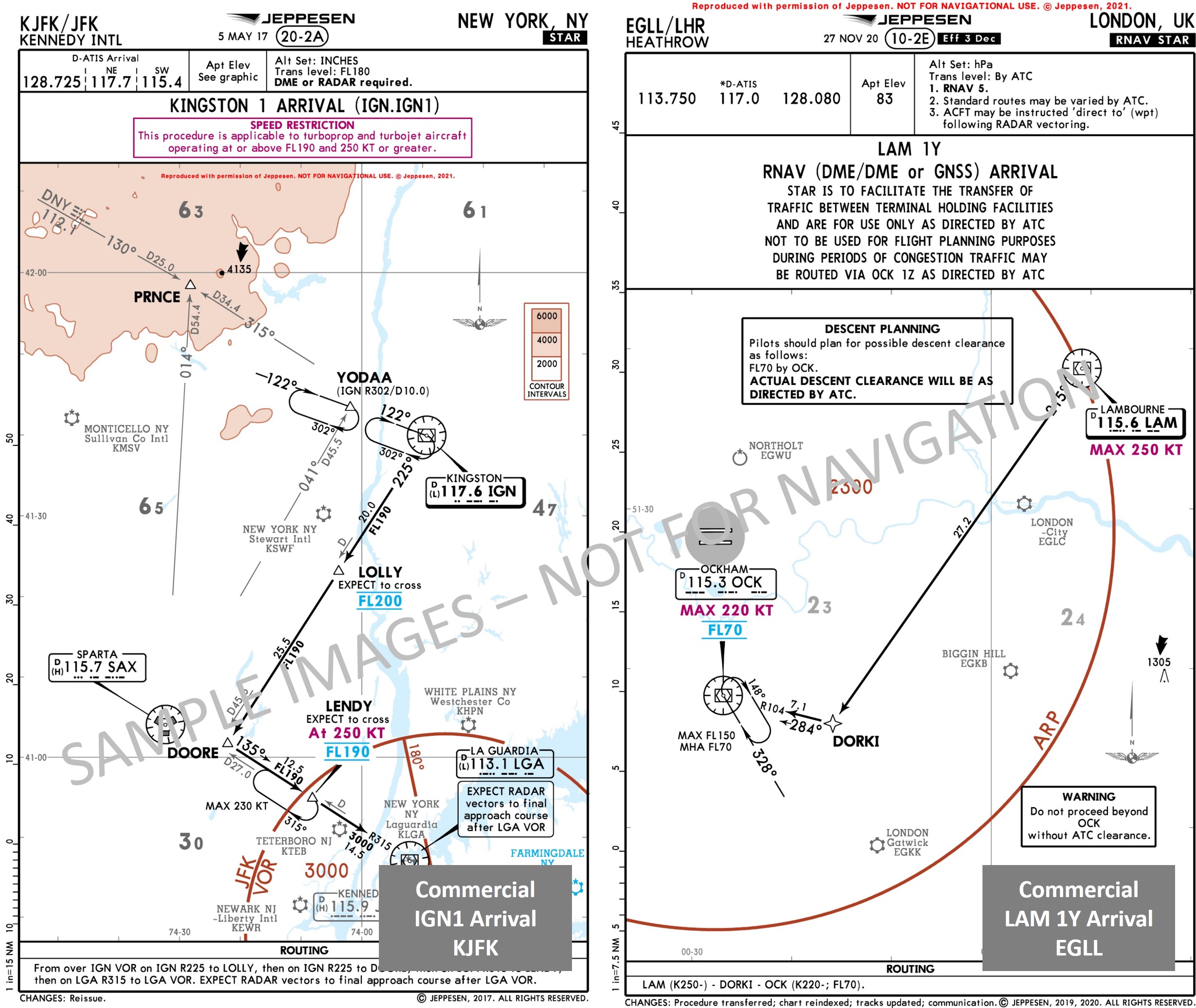 These same charts (IGN1 from KJFK on the left and LAM 1Y at EGLL on the right) have a similar appearance. The benefit of commercial charts like these is standardization across airports and countries. Airline pilots, who may fly to several countries over the span of a three-day trip, generally rely on commercial charts for this reason.

As you can see, the commercial charts (in this example, provided by Jeppesen) follow the same format, making it easier for pilots flying across multiple countries to interpret charts.

Government charts may be obtained from a wide variety of sources. It’s easiest to find charts for the United States because they are published for free at sources including AirNav, FlightAware, SkyVector, and directly from the FAA. You can find many European government charts by creating a free account on EUROCONTROL. Canadian charts are available with a free FltPlan.com account.

Although you can purchase commercial charts from real-world sources like ForeFlight, Navigraph is a provider of professional, worldwide and updated Jeppesen charts specifically for the flight simulation community. In addition to charts, they offer flight planning and navigation data to ensure synchronized information across apps and platforms.

Another free resource for aviation charts is ChartFox. The website provides access to government charts for various jurisdictions, all in one place. To access ChartFox, you’ll need to be a member of VATSIM, a free international online flying network. If you’re not already a member, you can join for free at www.vatsim.net. You can also find links to worldwide charts through this free, community-sourced resource.

VFR Pilots need a simple set of charts that provide basic information about arrival and departure airports as well as visual navigation charts for navigating in-flight. In the United States, VFR pilots will most commonly refer to Sectional Charts, the Chart Supplement, and Airport Diagrams. 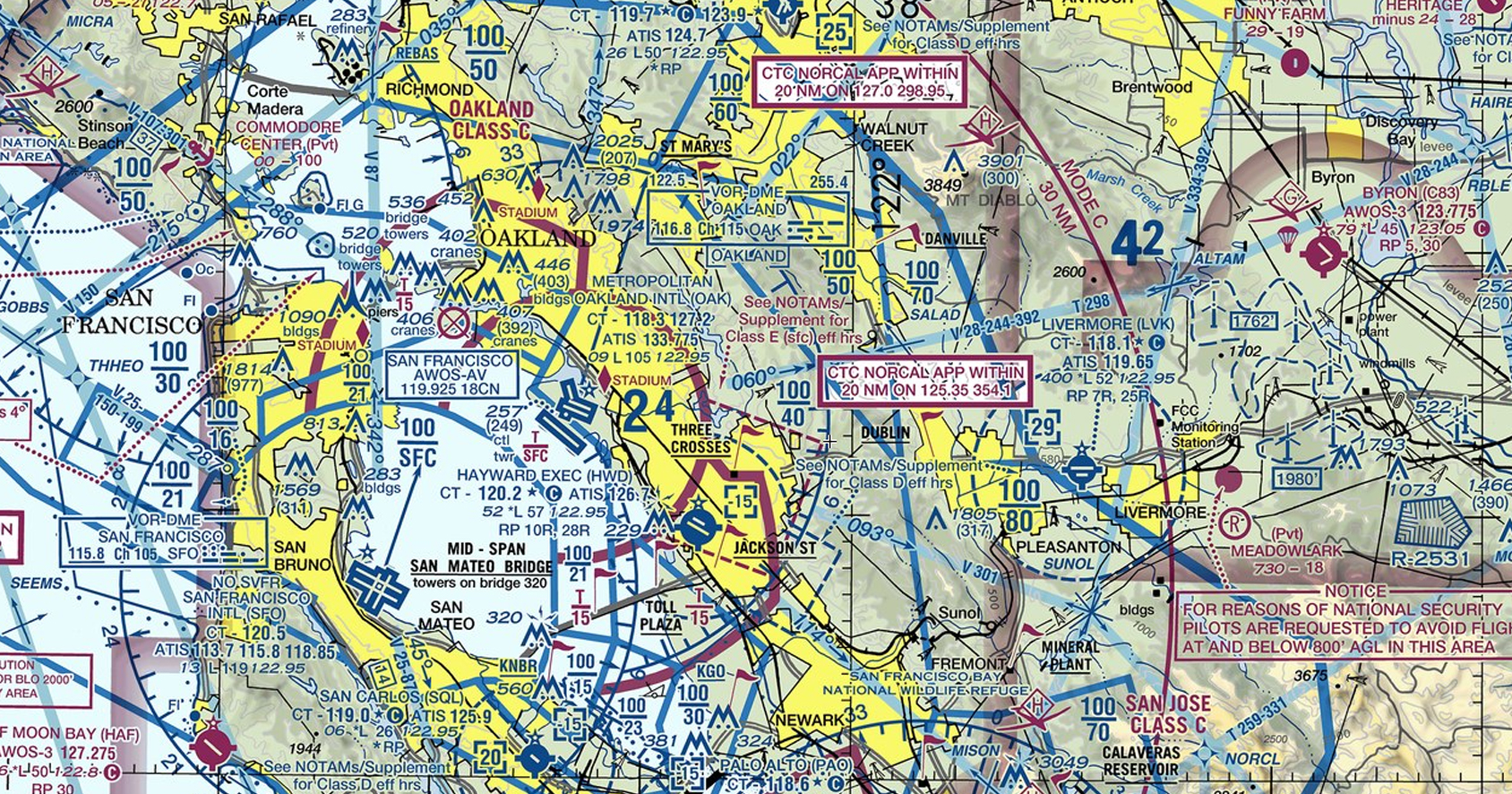 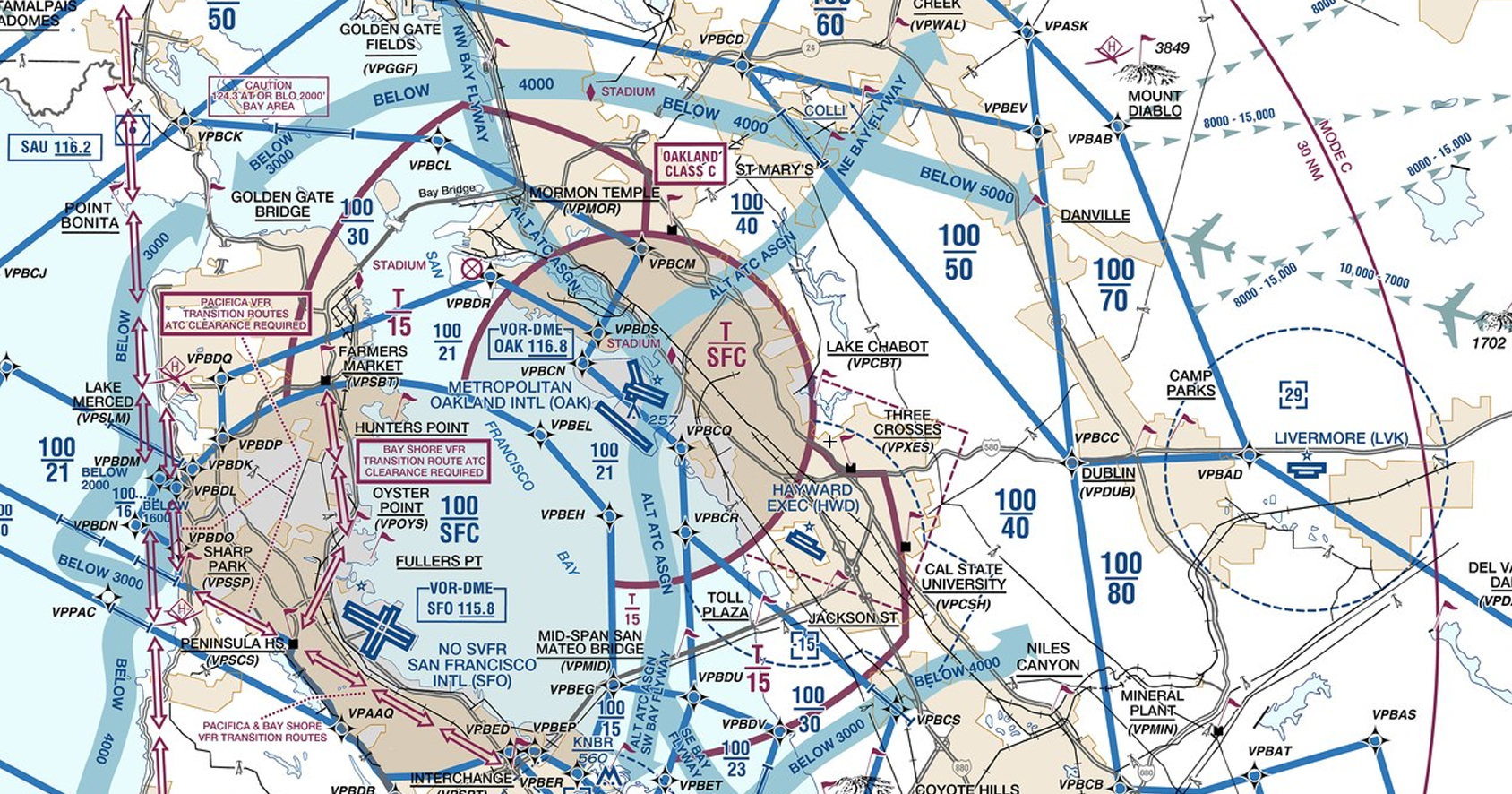 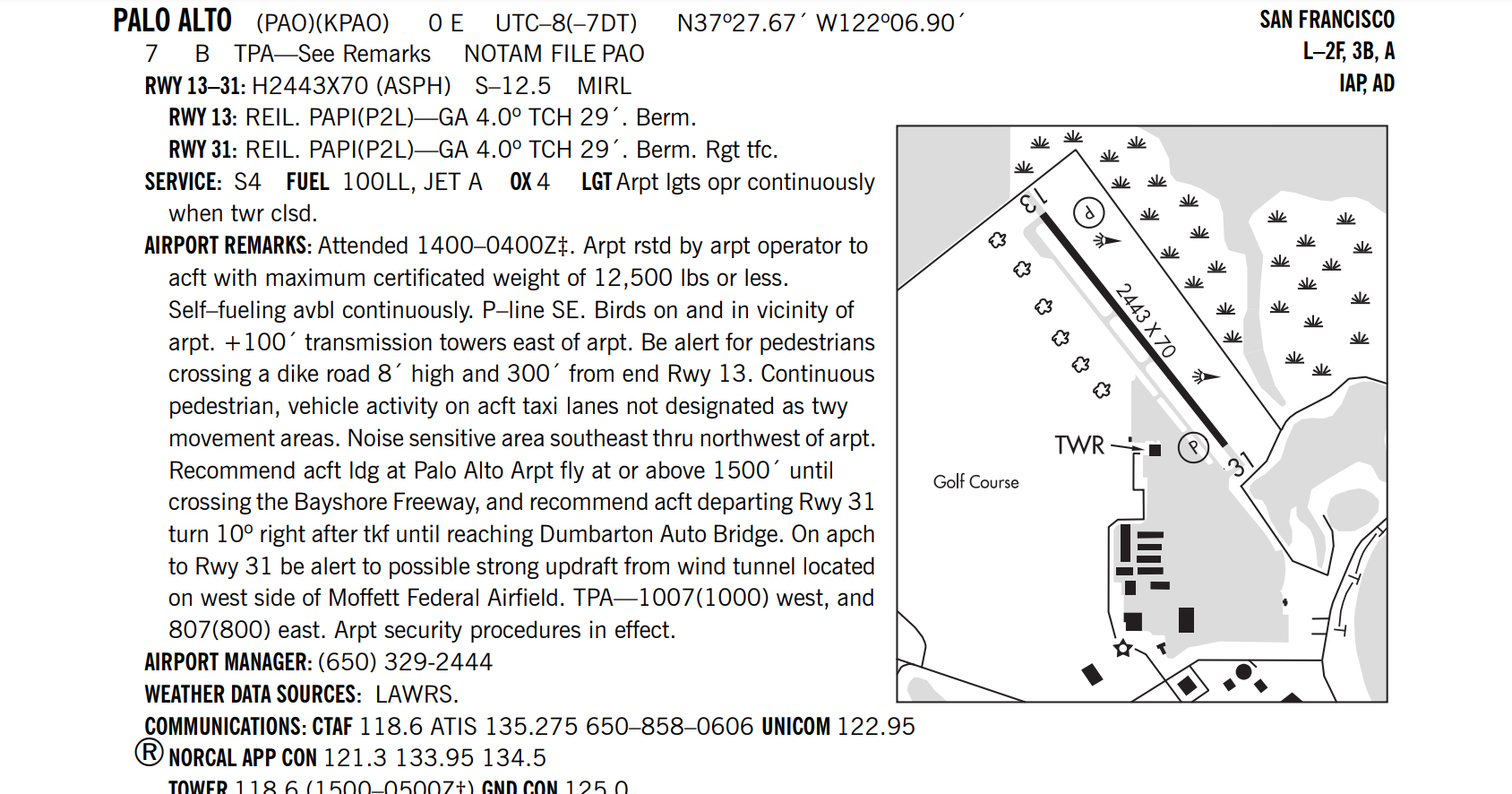 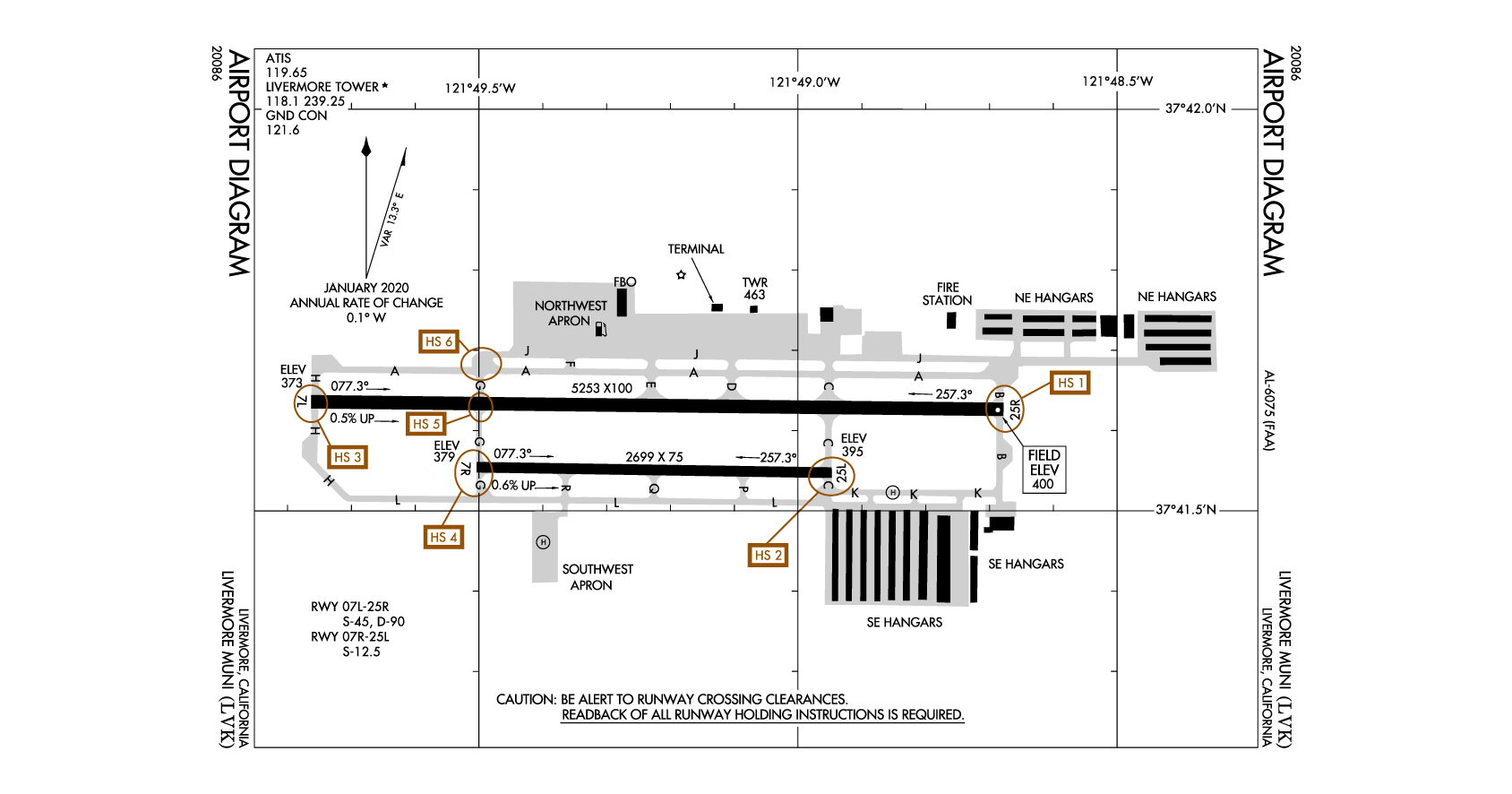 Sectional Charts provide almost everything a VFR pilot needs to know about airspace, airports, and navigation in one place. In other countries, you’ll find Sectional charts under various names; generally, they all provide the same information. On a Sectional, you’ll find airspace types, airport information (like runways and frequencies), obstacles, navigation aids, and much more. In addition to Sectionals, the FAA publishes Terminal Area Charts (TACs) and VFR Flyway Planning Charts (FLY) for busy terminal areas. TACs and FLYs provide similar information to Sectionals but in a “zoomed in” format with additional detail.

In the United States, the FAA’s Chart Supplement provides overview information about airports. In the example above, pilots can find runway information, available services, airport remarks, frequencies, and more about Palo Alto Airport (KPAO) in the San Francisco area. When operating out of towered airports, pilots can also reference an Airport Diagram, which shows a more detailed view of the airport with taxiway labels, an essential chart for finding your way to the runway!

The FAA publishes these charts free. You can find Sectional and TAC/FLY charts on SkyVector. You can also search the FAA Chart Supplement and find Airport Diagrams alongside other Terminal Procedures.

For an interactive experience on VFR charts, check out our Learning Flights. Flight 1 focuses on VFR flying and takes you on a scenic trip in the Rocky Mountains from Bozeman, MT to Jackson Hole, WY with a stop at the untowered Yellowstone Airport.

IFR Pilots use the visual charts described above as well as a separate set of instrument charts. These charts include Standard Instrument Departures (SIDs), Standard Terminal Arrival Routes (STARs), and Instrument Approach Procedures (IAPs). In addition, IFR pilots use enroute IFR charts, which display navaids and waypoints, to navigate between airport/terminal areas. 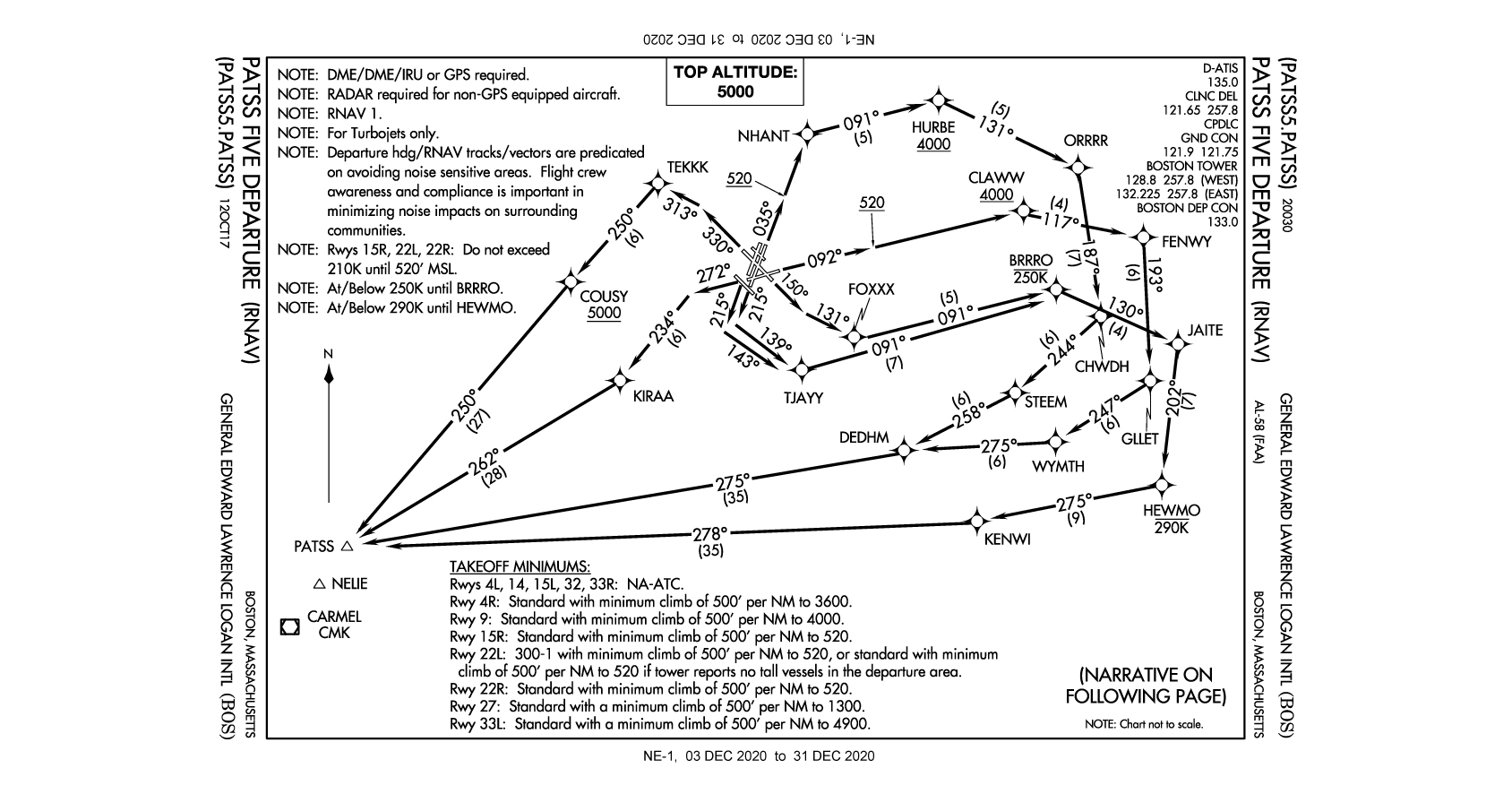 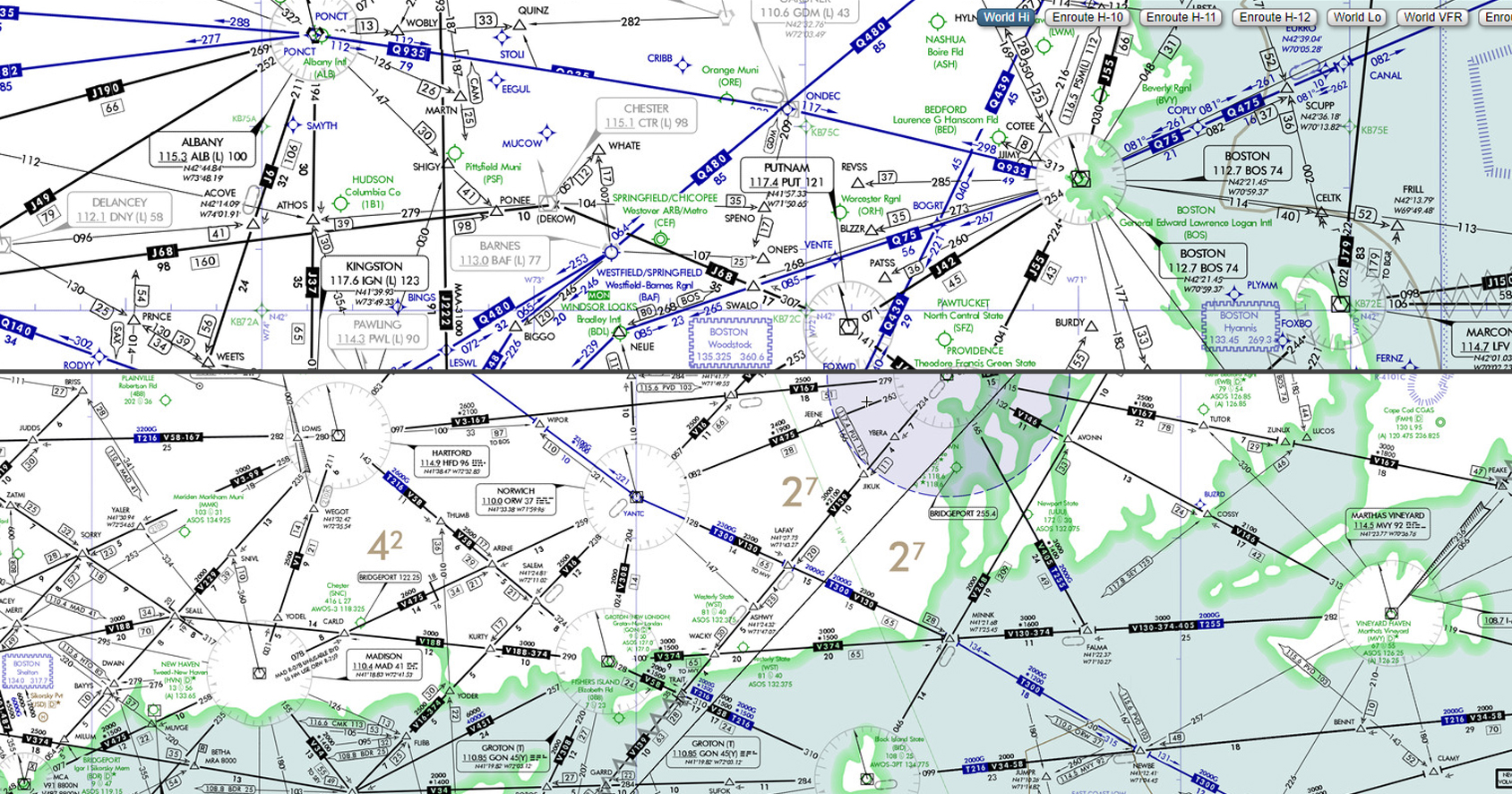 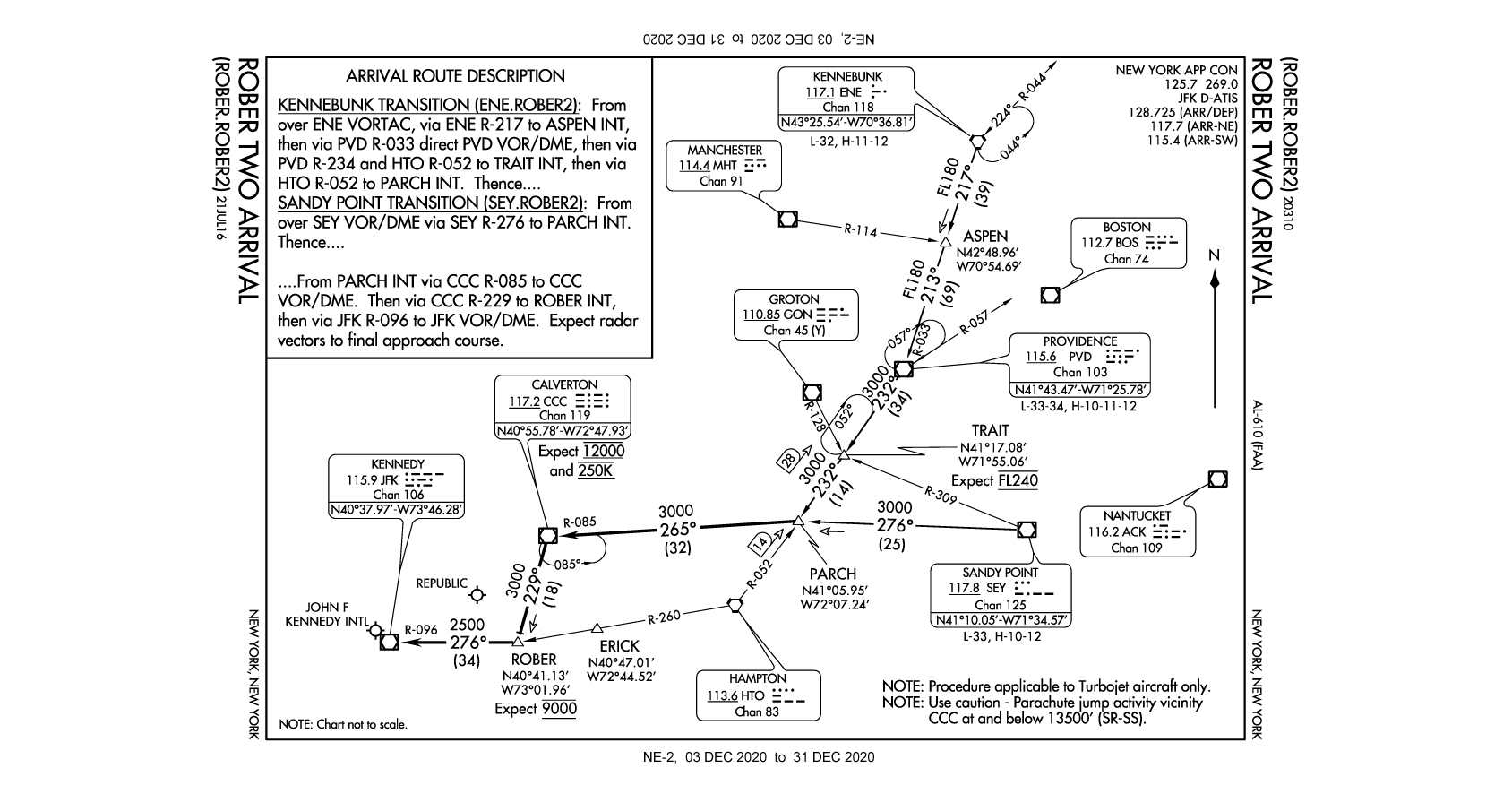 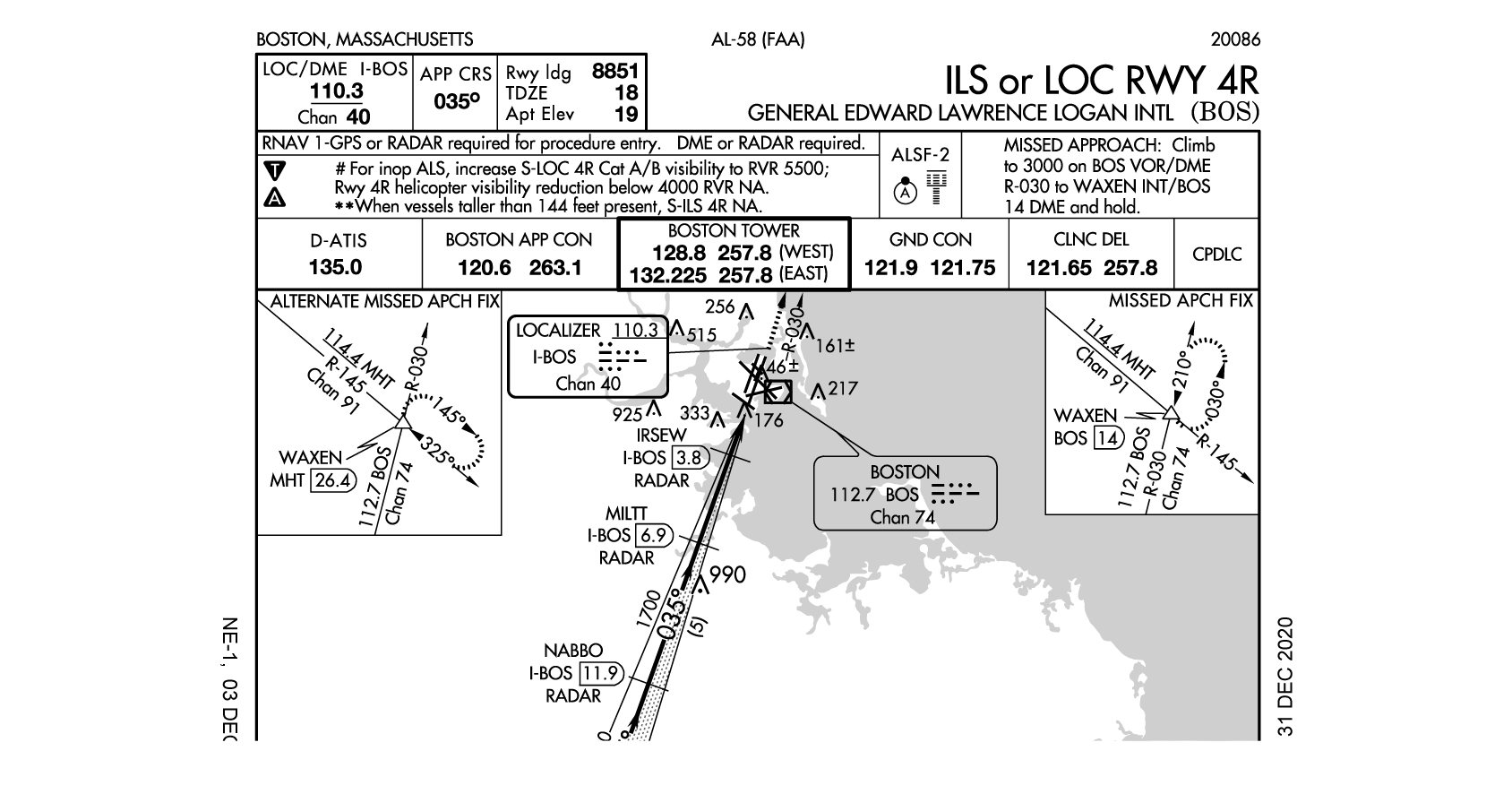 Together, these IFR charts are designed for pilots to safely navigate between airports. A SID provides an orderly transition from busy, terminal areas into the enroute environment, while also offering obstacle/terrain clearance. Enroute charts identify airways and other navigation aids. A STAR allows a pilot to descend into terminal areas, while IAPs provide instruction to safely approach an airport in instrument conditions using a variety of ground-based and/or RNAV equipment.

We cover instrument procedures in detail in our four IFR Learning Flights. If you want to learn more about how to read, interpret, and use IFR charts, we encourage you to get flying!